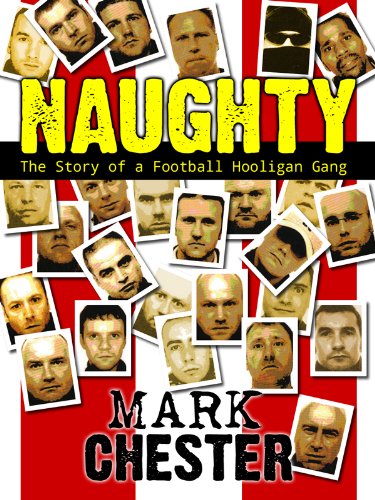 In 1985, forty hooligan followers of Stoke City FC experienced a riotous trip to Portsmouth - and the Naughty Forty was born. It became one of the most notorious soccer gangs in Britain.

Mark Chester was a founder member of the N40. Already a hardened fighter, he had been expelled from school after an unsettled childhood and joined the Staffordshire Regiment, only to be discharged for misconduct. Stoke City's emerging 'casual' mob became his family. 'Right or wrong, I was ready to be a committed football hooligan,' he says.

He recounts tales of raucous coach trips from the Glebe pub and the pivotal clashes with the likes of Everton, Manchester United and West Ham that defined the new firm. Formidable characters came to the forefront, men like the giant Mark Bentley, Philler the Beast and the legendary Miffer, while hair-raising clashes with the likes of Millwall, Spurs, Aston Villa and Manchester City saw the gang's reputation spread.

The N40 code was simple: whatever the odds, they would always make a stand. Many times they fought when heavily outnumbered yet often came out on top. They developed a closeness and cohesion rare among the football gangs. Loyalty was their watchword.

Soon they were joined by the Under-Fives, a younger element determined to win acceptance from the terrace legends they admired and who carved out their own niche as well as fighting side by side with the old-school heads.

Police operations, bans from the ground and the introduction of ID schemes have prevented many from attending games, but the author, long 'retired' from the scene, argues that in the new millennium the gangs are back - and as ferocious as ever. NAUGHTY is essential reading for anyone wishing to understand the illicit but seductive lure of terrace combat, the emotional ties of a gang and the addictive buzz of Saturday afternoons.
Libros Relacionados